The design of Kanister follows the operator pattern. This means Kanister defines its own resources and interacts with those resources through a controller. This blog post describes the pattern in detail.

In particular, Kanister is composed of three main components: the Controller and two Custom Resources - ActionSets and Blueprints. The diagram below illustrates their relationship and how they fit together: 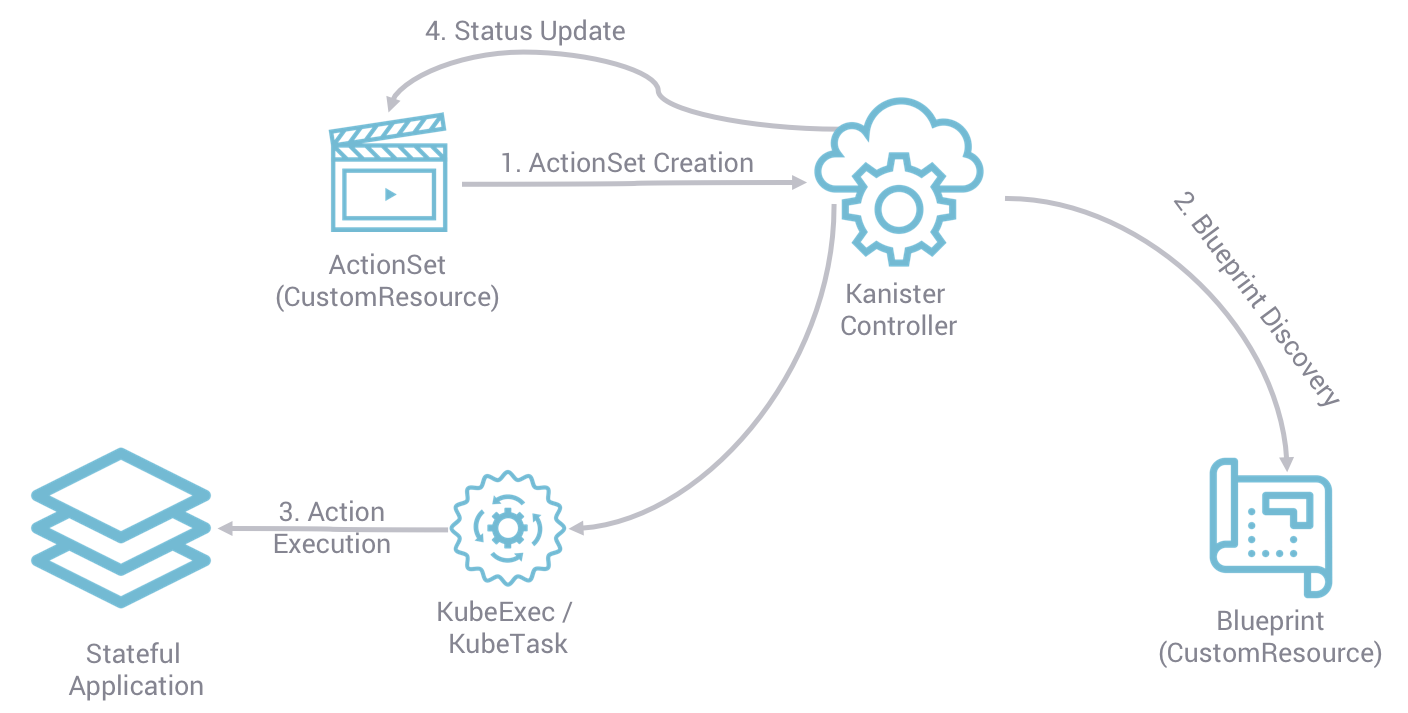 As seen in the above diagram and described in detail below, all Kanister operations are declarative and require an ActionSet to be created by the user. Once the ActionSet is detected by the Kanister controller, it examines the environment for Blueprint referenced in the ActionSet (along with other required configuration). If all requirements are satisfied, it will then use the discovered Blueprint to complete the action (e.g., backup) specified in the ActionSet. Finally, the original ActionSet will be updated by the controller with status and other metadata generated by the action execution.

Users interact with Kanister through Kubernetes resources known as CustomResources (CRs). When the controller starts, it creates the CR definitions called CustomResourceDefinitions (CRDs). CRDs were introduced in Kubernetes 1.7 and replaced TPRs. The lifecycle of these objects can be managed entirely through kubectl. Kanister uses Kubernetes' code generation tools to create go client libraries for its CRs.

The schemas of the Kanister CRDs can be found in types.go

Blueprint CRs are a set of instructions that tell the controller how to perform actions on a specific application.

A Blueprint contains a field called Actions which is a mapping of Action Name to BlueprintAction.

The definition of a BlueprintAction is:

As a reference, below is an example of a BlueprintAction.

Creating an ActionSet instructs the controller to run an action now. The user specifies the runtime parameters inside the spec of the ActionSet. Based on the parameters, the Controller populates the Status of the object, executes the actions, and updates the ActionSet's status.

As a reference, below is an example of a ActionSpec.

In addition to the Spec, an ActionSet also contains an ActionSetStatus which mirrors the Spec, but contains the phases of execution, their state, and the overall execution progress.

Unlike in the ActionSpec, the Artifacts in the ActionStatus are the rendered output artifacts from the Blueprint. These are rendered and populated once the action is complete.

Each phase in the ActionStatus phases list contains the phase name of the Blueprint phase along with its state of execution and output.

Deleting an ActionSet will cause the controller to delete the ActionSet, which will stop the execution of the actions.

Since ActionSets are Custom Resources, Kubernetes allows users to delete them like any other API objects. Currently, deleting an ActionSet to stop execution is an alpha feature.

Profile CRs capture information about a location for data operation artifacts and corresponding credentials that will be made available to a Blueprint.

The definition of a Profile is:

As a reference, below is an example of a Profile and the corresponding secret.

The Kanister controller is a Kubernetes Deployment and is installed easily using kubectl. See Installation for more information on deploying the controller.

The controller watches for new/updated ActionSets in the same namespace in which it is deployed. When it sees an ActionSet with a nil status field, it immediately initializes the ActionSet's status to the Pending State. The status is also prepopulated with the pending phases.

Execution begins by resolving all the Template Parameters. If any required object references or artifacts are missing from the ActionSet, the ActionSet status is marked as failed. Otherwise, the template params are used to render the output Artifacts, and then the args in the Blueprint.

For each action, all phases are executed in-order. The rendered args are passed to Template Parameters which correspond to a single phase. When a phase completes, the status of the phase is updated. If any single phase fails, the entire ActionSet is marked as failed. Upon failure, the controller ceases execution of the ActionSet.

Within an ActionSet, individual Actions are run in parallel.

Currently the user is responsible for cleaning up ActionSets once they complete.

During execution, Kanister controller emits events to the respective ActionSets. In above example, the execution transitions of ActionSet s3backup-j4z6f can be seen by using the following command: